Everything to be Thankful for: The Rock Avengers Tour hits SLC 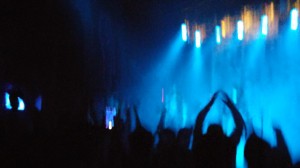 It started like every other rock show. A venue, a bar, merch tables tucked in corners with high traffic but not in the way. Setup. Dim lighting. But as with every Royal Bliss show, you never quite know what you’re going to get. On November 26th, 2014, what the crowd got was five and a half hours of rock, storytelling, and drinking.

The Pre-Thanksgiving Royal Bliss show is a tradition in the Salt Lake City rock scene. The band has been a fixture on the scene for over a decade, and every year they throw a huge party the night before Thanksgiving. For the past two months, the guys behind radio hits such as Devils and Angels and Here they Come have been on the Rock Avengers tour with Bobaflex and Australian rockers October Rage, and brought both bands with them to the party, also inviting American Hitmen, who are also well known to the Salt Lake scene.

October Rage, who hail from Newcastle, Australia, are a young, hard rocking quartet with a sky-is-the-limit potential. Frontman Nick Roberts exudes a kick-ass-yet-dorky personality on stage, all the while wielding his axe like a weapon as he charts a path through the ever-dangerous US rock scene. As with all rock bands, success is as much to do with charisma and charm as talent, and these four rockers have the goods. While their riffs are nothing yet to write home about, they shine in a way that pulled many a jaded drinker from the back of the venue by the bar to the front of the crowd, proving that the Australian Rock Scene did in fact not die when Sick Puppies made the move from Sydney.

Local blues-rockers American Hitmen were next, bringing an almost 70’s rock vibe to the room as they took the stage in leather biker vests and tight black jeans. They cruised their way through a set that included covers of classic favorites and hard-hitting originals. Three of the members of the band met while serving together in Iraq and that bond they brought back from the desert shows on stage as their set is a give and take of collaboration and solos.

The West Virginia quintet Bobaflex carries themselves as if they just stepped out of a Ramone’s tribute band but their sound is as full and face-melting as any hard rock group’s should be. Their set, which included the single best cover in existence of the classic Sound of Silence, revved the crowd and ended far too quickly.

And then came why the crowd was there as Royal Bliss took the stage.

While not quite metal, Royal Bliss still brings that hard-ass, hard-rock, ass-kicking mentality to the stage in everything they do. The Salt Lake City quintet will have as many as three guitars on stage while blasting their way through their set, and frontman Neal Middleton never met a “Fuck” that he didn’t like to say. Yet, they never take a single moment they spend on stage for granted. Every song break is peppered with thank yous to the crowd, their wives, their girlfriends, and their kids. Songs are belted not just from Neal’s soul, while lead guitarist Taylor Richards channels his inner Jimi Hendrix and bass player Dwayne Crawford provides the hard-hitting heartbeat. Throughout the course of the show, the crowd is taken on a journey that demands whiplash inducing headbanging and tearful cuddling with the significant other at your side.

Despite the well-oiled machine that is a Royal Bliss show, rock music always demands a sacrifice and last night, it was the equipment. Midway through the show, a monitor started to smoke and Neal had to bullshit his way through stories and finally just gave himself over to laughing at the problems and their history as the “Unluckiest band in rock” as he admitted that “Everything Royal Bliss touches, breaks.” He also gave a lecture to the men in the crowd, saying that “if you disrespect women, you aren’t cool, you’re an asshole.” As a woman, I desperately appreciated the comment. He also gave a jab to corporate radio and record labels, hollering out that they shouldn’t have to pay the radio stations to play their music, especially in their hometown. For the record, all of the bands on this tour are independent.

The show ended with Neal coming back on stage in a jacket that only a preacher could love and doing an impromptu three minute “preacher-style” thank you before the band launched into the ever-loved Fine Wine and Champagne before all four bands came on stage for a cover of A Little Help from my Friends and a performance of Royal Bliss’ signature I Was Drunk. Finally, Neal and Taylor stepped into the crowd for a campfire circle rendition of Home.

Those who stayed the course for the entire night, for all five and a half hours, had everything to be thankful for.

You can check out my rather crappy phone photos here. 😉