Yeah, yeah. Every writer’s blog has a whole series devoted to this kind of stuff. We all know it. Freelancer Problems. But, a post popped on up facebook today that wouldn’t let me go. And since I’m also getting back into freelancing on a regular basis, I thought there was no better place to start than here: 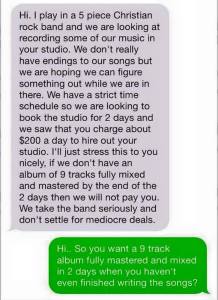 Posts like this go around all the time. In fact, there’s a whole series of videos from a rock and metal producer on YouTube and he talks about the costs of producing and why you pay for what you get. But today, it stuck with me. Maybe because the guy who posted it is one of my freelance clients and I really like him. He also can’t pay me for my work.

Gotta say it – I feel nothing but sympathy for the producers getting bullshit like this sent to them. But writers are expected to accept as little as NOTHING for our work. All in the name of exposure. I love writing, I love doing it, and I will take on limited projects for free, especially while rebuilding a portfolio that used to kick ass. But writers have families to feed too, and paid work is often as little as $.01 cent a word. A 150 word article can take anywhere from 1-2 hours to write, when you put in research and editing. So, when you do the math, I’m making $1.50 an hour, if that article only takes an hour to do.

So put that in perspective:

If a writer has a full time day job to support their family, that eats up 8-10 hours of their day. Come home, get settled into the night, deal with family, etc. That leaves anywhere from 5-6 hours to write. That sounds great. But let’s say a 200 article takes 2 hours to write, including research, writing, editing, and submission. And then that writer has to wait to find out if they are going to be paid their $2.00 for that time. While waiting, they accept another “job” but this one doesn’t pay. This is a review of a TV show. Which means that it’s at least an hour to watch the show, another hour to research the history of the show, and then at least an hour to write a 500 word review and edit. All for no pay. And then, it’s bedtime. So if the writer is lucky, they’ve made $2.00 for 5 hours of work.

Yes. Writing, like art, like music, it’s all about the blood and sweat and tears that are put into projects. A novelist who is just getting started will toil and toil and toil for years, staying up late into the night while crafting those perfect 90,000 words and there is a good chance that not a cent will be paid back for that time. Just like a musician will work a dead end telemarketing job to fund an album. And an artist will sell canvasses for $25 at local coffee shops.

But the fact is, writers are expected to put up with a lot of abuse and the argument is that there is someone else in line who is willing to do it. And more and more, jobs that pay, pay based on the number of “clicks” to a website. Which means that really, the owner of the site is making the money. For the record, there are sites that pay real money and there are countless blogs and facebook pages out there dedicated to making sure that writers are aware of the markets that pay.

I don’t mean to ramble and I don’t mean to make this about money. Because writers will write. We’ll write until our fingers bleed and the carpal tunnel is so bad we can’t sleep. We’ll live on coffee and lose partners and we understand how lonely ramen tastes.

But really, my point is, I’d like to see more of these text message memes pop up about writers having to accept this kind of work. Period.

“Discussions” with my brain at 6 AM …

I think every writer out there can relate to this …

Me: *stretches and wakes up a bit*
Brain: Hey! Let’s have a conversation.
Me: It’s too early and I haven’t had any coffee yet.
Brain: So what! I’m up. You’re up. Let’s talk.
Me: It’s six in the morning and I’m hot and tired. Can this wait?
Brain: So here’s what I’m thinking. You know that whole “follow your bliss” thing?
Me: It’s six in the morning. My bliss is going back to sleep.
Brain: Okay, I can’t argue with that logic. But, seriously, we gotta talk.
Me: What did I say?
Brain: Come on, you’re up and arguing with me. So, what I was thinking was this …
Me: I’m not going to win this one am I?
Brain: So what I was thinking was this – you are really ready to take your writing to the next level, right?
Me: Yeeeahhhh …
Brain: So maybe you need to quit your job and just do the freelance thing.
Me: Or I can build up a freelance reputation and then quit my job.
Brain: But … bliss …
Me: But … bills.
Brain: You know, those words are almost identical.
Me: But not.
Brain: Kind of.
Me: No, really. Not. I appreciate this pep talk but it’s now 6:15 and I have to get up in a bit and I’d like to get some sleep.
Brain: *sends pain to nerves* You still want to sleep?
Me: YES! You made it so I can’t.
Brain: Sorry about that. But I’m following my bliss here.
Me: So what did you want again?
Brain: Bliss.
Me: Look, yes, I would love to drop my job and hit the road as a merch girl or writer A-La-Almost-Famous or something. But I’m in a good place right now too.
Brain: Because 8-5 is really your style? When was the last time you actually got to work on time?
Me: That isn’t the point and you know it.
Brain: What is the point?
Me: …. can we do this later?
Brain: *grumbles* Fine. But, hey, listen to this –
Me: What?
Brain: You write rock fiction for a reason you know.
Me: Yeah, because I love the themes and the characters are fucking sexy.
Brain: Well, maybe there’s a lesson there. I mean, the real rock stars, they give up everything and take that risk. Maybe it’s time you thought about that too. Not saying you have to take off on the road or anything but it might be good if you changed things up.
Me: You’ve been saying this for a while.
Brain: Yeah, but not at 6:45 in the morning.
Me: I love my day job though. If I leave it and have to get a day job I hate I won’t be writing as much.
Brain: Life is risk.
Me: I’m going back to sleep.
Brain: Now you’re being logical.
Me: On a couple of levels.
Brain: I know, I’ll create some dreams for you about what it’ll be like if you are able to follow your bliss.
Me: Whatever. But if you do, create a savings account I can live off of so I can in fact follow that bliss.
Brain: Oh …yeah.
Me: This was funnier an hour ago.
Brain: It wasn’t meant to be funny.
Me: I know.
Brain: We’ll get there, right?
Me: Yeah.
Brain: Sleep doesn’t matter, right?
Me: You’re the one keeping me awake right now.
Brain: Oh yeah.
Me: Mind releasing those pain receptors?
Brain: Hmmmmmmm. Nah. I think I’ll leave them.
Me: Jerk.
Brain: Last I checked, we were connected, Sweetheart.
Me: Don’t call me sweetheart.

Ask any writer how to be a successful writer (and for the record, I am not yet one) and they all say the same thing: put your damned butt in the chair and get shit done. And yes, a lot of the time that means turning off the distractions and unchaining yourself from the internet and just writing. No matter how much it hurts to do so. And sometimes, it actually hurts. Sometimes, writing also means admitting that you can’t get it finished by your self-imposed deadline.

Earlier this year I wrote a one-act play. Oh, the 45 pages of women sitting in a used bookstore didn’t need any kind of queer subtext. It was right there and the 45 pages just flowed from my fingers and the people who read it, loved it. I submitted it as proof that I can write scripts and then tucked it away. Now, I am expanding it into a full length play and it’s amazing how much harder it is to make all of these little bits and pieces fit together over the course of 90-100 pages. Initially, I was going to have some actor friends get together today and read through the new and improved lines. What I didn’t take into account when I set it up earlier this week was that this wasn’t just going to be expanded but completely rewritten. So, today has come and I am no where near ready to have anyone read this thing. But, the improvement is immeasurable. I call that progress.

So, sometimes what it means to be a successful writer is just to allow the self-imposed deadlines to pass. There are much more important deadlines coming up – like January 31st, when this gets sent over to Plan-B theater company for their emerging writers competition. Which means I have 20 days.

I got thinking last night about writing and sacrifice and what writers sacrifice to get the job done. The easy thing to point to is a social life. I’m lucky enough to date two women who know that my first commitment is to writing and not to them, and I’m lucky enough that communication is very important for us, but I haven’t seen either of them since Sunday. Last night, my date was my computer and the cats who wanted attention while I spent four hours with five characters who live in a small town inside my head. A couple of hours into my work, a good friend messaged me with some very interesting potential developments in her sex life. I had a moment where I wondered how much I was missing of the lives of my friends as they rolled on while I spent time writing out stories.

Writers sacrifice. Everyone does, yes. But there is a specific sacrifice that comes within the creative community. From artists to singers to writers, we give up a lot and we risk hurting people in the process. “I can’t tonight, I’m writing” always runs the risk of sounding like “I really just don’t want to go to your party or hang out with you or anything at all.”

I think it’s good to have this reflection every so often because it’s so easy to get defensive about the reality of life as a writer. I know I’ve often rolled my eyes and stomped off to do something that I know I’ll enjoy doing but honestly, I’d rather be writing. It’s easy to say “no really, this is my life!” But for myself, I’ve really never put it in terms of personal sacrifice. I’ve never really sat and thought about what I could be missing … until a friend messaged me about her sex life that is.

To all the writers out there who are struggling with this very thing, it’s okay. I think we’re supposed to be conflicted as hell. I mean, I’d rather not be. I’d much rather be making a living writing my books and plays and then hey, I could totally have a social life, right?

Not really. I mean, think about it.

I’d still rather be writing.