Raging Down Under: Talking to Newcastle’s October Rage 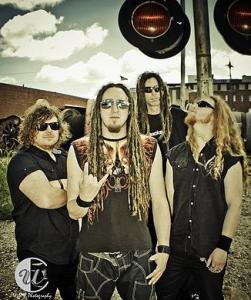 There aren’t that many bands from Australia who have made an impact on US radio. Silverchair is a staple to those of us who grew up in the 90’s, and while Sick Puppies is no longer based in Sydney, bassist Emma Anzai claims the island country as her home. But over the past few years, a new name is starting to appear on US tours with bands likes Sevendust and Bon Jovi. Most recently, Newcastle based October Rage did the opening duties for Bobaflex and Royal Bliss on their Rock Avengers tour. Taking full advantage of the change in the music industry and how easy it now is to get music out to a hungry public all over the world, the quartet can stay home to record and are finding themselves with a waiting audience when they get to the States.

One of the most interesting facets to October Rage is that despite having only an EP and LP to their discography, they are proving to be one of those bands that evolves quickly over time, and it is clear that their musical influences are woven throughout their work. Listening to song from their debut LP, October Rage is a band that is still finding its way through the rock scene, providing ballads that are as kick ass as hard rock but still finding a balance between lyricism and style. More recent songs such as the Game of Thrones inspired White Walkers (more on that below!) give a deeper and more mature rock tone to their sound.

After their second US tour, October Rage took to the studio to record their second full length album with plans to take back to US stages in 2015. Considering how hard it is to do a face-to-face interview when you live on the other side of the planet, Lead singer Nick Roberts provided some answers to some burning, and basic, questions about life as a musician and life in the industry. He also reveals his Superhero Alter Ego.

Basic stuff, because that’s what people need to know about you guys…

How did October Rage form and what keeps you together?

Nick: Well, my brother and I started the band in 2008, we’ve had numerous members before the current line-up, but the current one sticks because we’re a good match for each other – everyone’s on the same page and want to ultimately go in the same direction, and I know if the chips are ever down I can turn around and there’s 3 other kickass guys who’ve got my back.

Nick: We’re in Australia right now doing some work in the studio but we’ll be back in the USA very soon.

Who are your biggest musical influences?

Nick: Personally for me it’s stuff that my dad got me into when I was still crawling. Things like Led Zeppelin, Deep Purple… its the same for my brother, I’m sure. We’re all also big fans of everything from Van Halen or Thin Lizzy to stuff like Beethoven.

What is the culture of the rock scene in Australia? Compared to the States? Do you prefer the states or Australia? And what are the strengths and weaknesses for each country?

Australia has an amazing bunch of bands that I’d love for the rest of the world to know about. Unfortunately it is very difficult for a band to grow in Australia because the country is HUGE, but has less than a tenth of the population the US has. Though we still call Australia home, we also love our dedicated fans in the USA.

If you could tour with any rock bands right now, who would they be and why?

Where would I start! I know for sure I’d love to be back on the Rock Avengers lineup we had going last year with Royal Bliss and Bobaflex. We also love the guys from Saliva and it’s always a blast touring around with those guys. Bon Jovi would be great to have happen again, I’ll call him up and see what he’s up to.. maybe…. haha

What is the process for coming over from Australia and touring in the states? How long can you stay? What is the immigration procedure?

Nick: Unfortunately the Visa process and Immigration procedure is painfully long and very expensive, but it’s always worth the hassle because we love our USA fans so much and it’s an amazing country to be a part of.

Would you prefer to work in Australia or in the States?

Nick: Both have their reasons for tugging at my heart strings, so that one’s hard to answer. Australia is still home, and I love playing to the home crowd. But the USA fans love us so much, we can never stay away for long!

What have you learned about yourselves as musicians and as a band from the last album to the current tracks you have available?

Nick: I’ve definitely learned that while I’ve still go so much more to learn when it comes to writing and playing, each time I do it I realize how much more I love it!!

What is the hardest part about incorporating new members into the band dynamic?

Nick: The hardest part is that initial finding of just the right dudes who are on the same page as the rest. Though everyone wants to make it in the music world, not everyone is happy to simply leave everything behind and pack up and go. You’ve got to really love it.

What is the hardest part about being in a band process with a family member?

What are your thoughts about the state of the music industry and do you think that artists can survive in the current climate?

Nick: The music industry has changed so much already and will probably continue to evolve. I’d say that artists can definitely survive if they learn to adapt and just keep putting in the effort to do great things. The world will ALWAYS need music, so there’s always a demand.

All right, let’s get to the cool stuff…

Regarding White Walkers, your Game of Thrones inspired song, how did that come about? Was there collaboration with the show or was it a band thing only?

Nick: White Walkers (the song) definitely exists because I’m such a big fan of Game Of Thrones – though it was done on our own, we did email it to George Martin himself, whom replied “Sounds great!”

What book(s) are you reading right now?

Nick: I’m a slow reader so I’m not as far through the Game Of Thrones books yet as my brother is. But I’m also a big fan of non-fiction and I read a lot about the world economy and business.

What “guilty pleasure” album is currently on your playlist?

What musical influences do you have that would surprise your fans?

Nick: There’s at least two members of the band that are into country music…. but you’ll never find out which ones, haha.

And last but not least…

What Bond Villain OR what Super Hero Villain would you be in a Comic Book Series and why?

Nick: The evil fear cloud villain from The Green Lantern. Come, on, it’s a “yes” brainer, what even is that?? Or maybe The Joker.. because Heath Ledger.

The world may never know …

Available for Purchase at octoberrage.com